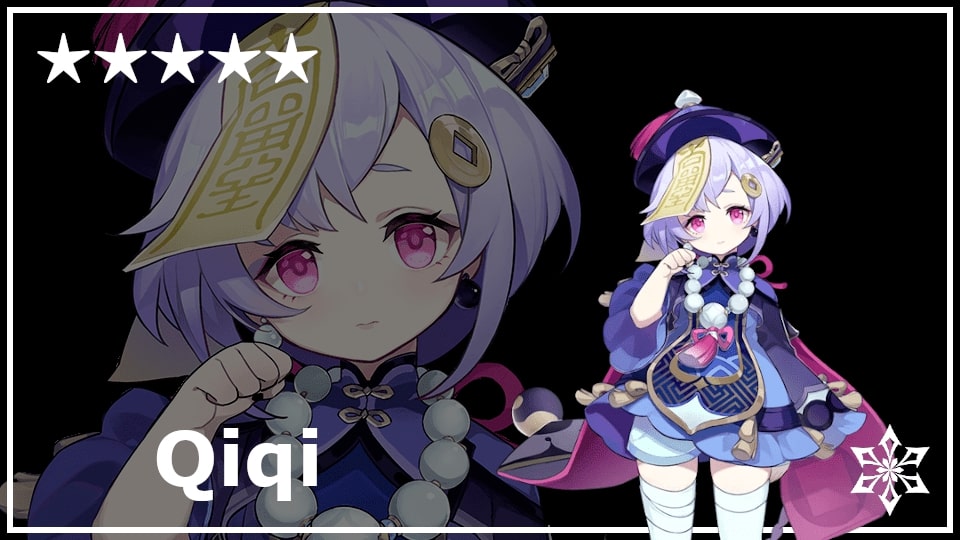 Don’t let her looks fool you. Qiqi may look like a little girl, but she is actually a zombie that has been revived by an adepti. She has been blessed with the ability to never age nor die. However, she is cursed to obey the orders of her master. Qiqi will try to complete her task to the best of her ability, but will struggle with more complex instructions. She is currently under the care of the owner of Bubu Pharmacy, Baizhu, and works as his assistant. Qiqi is first introduced to the player while collecting materials for the rite of Rex Lapis. She has cryo vision and wields a sword as her weapon of choice.

It is said that Qiqi received her vision as her dying wish from the combined powers of the adepti. However, she went berserk and the adepti had to seal her away for hundreds of years. After, centuries imprisoned in amber, she was discovered by humans and bought to the Wangsheng Funeral Parlor for a proper burial. Qiqi eventually escaped from the funeral parlor where she eventually met Baizhu.

As a zombie, Qiqi’s memory is very poor. She even forgets Baizhu’s face. She has forgotten most of her former life, but remembers certain things that she liked, such as her love of coconut milk or cocogoat. She carries around a notebook and writes down important instructions. However, she sometimes forgets to even read her notebook. Qiqi must also perform stretches frequently or rigor mortis will start to set in. She is stiff most of the time, but can be quite nimble in combat.

Qiqi is a 5-star Cryo character from the region of Liyue that wields a sword as her weapon of choice. She first appears within the story when the Traveler goes to Bubu Pharmacy to receive items for the Rite of Rex Lapis.

Qiqi works as an excellent support character with her ability to heal herself and her teammates. She is a 5-star Cryo sword user and is currently the best healer in the game and will make sure your team never dies with her ability to apply Fortune-Preserving Talisman. Enemies marked by Fortune-Preserving Talisman will regain health once you deal damage to that enemy.

For her normal attack, Ancient Sword Art, she unleashes 6 rapid melee attacks on her enemies. It is easy to use, but is nothing special until you ascend to her 4th stage, which will give her the ability to trigger Fortune-Preserving Talisman with her normal attack. However, I wouldn’t focus on leveling this skill as much as her other skills. I wouldn’t recommend her as your main DPS, but Qiqi can be a combat healer, as she can heal and damage enemies at the same time.

Fun Tip: Her shortness may make it hard for enemies to hit her.

The elemental skill of Qiqi, Adeptus Art: Herald of Frost, will deal both cryo damage to nearby enemies over time and regenerate health for the party based on her attack stats. This skill will still work if you switch characters! It can also be used to trigger the freeze elemental reaction to stop enemy movement. With a high attack stat, her continuous regeneration makes her a stable healer for any team. You will want to prioritize getting this skill level as high as possible so you can get the best possible heal regeneration. This skill scales off her attack, so the higher her attack, the more you will heal!

For her elemental burst, Adeptus Art: Preserver of Fortune, Qiqi releases a cryo explosion that marks nearby enemies with Fortune-Preserving Talisman. This skill is effective in hitting a group of enemies, but will also give you the chance to recover any lost health. At lower ascension levels, Qiqi’s burst will be the only way to apply Fortune-Preserving Talisman. This skill should also be maxed to increase her healing potential. The 80-second cooldown is also pretty long, so her ability to mark enemies will be hindered until ascension level 4. It also uses a lot of energy, so it will take a while to recharge her elemental burst unless you prioritize energy recharge on her artifacts.

Qiqi makes for a great team member in co-op. She can heal her team, while still doing damage to the enemies. Her main role will be to keep the team alive and provide cryo reactions with her elemental burst and skill. She far outclasses Barbara, who acts more like a healer and will deal more damage.

Tip: Qiqi gets a Healing Bonus based on her ascension level.

Qiqi’s first passive talent, Former Life Memories, is useful for exploring the region of Liyue. It allows her to view all resources that are close by if she is in your party. I wouldn’t recommend exploring with Qiqi, however, because of her short figure. She will consume more stamina climbing the mountains and swimming large bodies of water. Qiqi just needs to be in the party for her talent to activate.

Life-Prolonging Methods boosts Qiqi’s healing potential when switched to another character. As long as her elemental skill is in effect, elemental reactions caused by the skill will increase the health regained by 20%.

A Glimpse into Arcanum makes Qiqi even deadlier with her normal attacks. When she attacks, there is a 50% chance to apply Fortune-Preserving Talisman. This is an effective way of healing a weak ally if her elemental burst is not ready yet. However, there is a 30-second cooldown, so this ability can not be spammed. It doesn’t hinder her ability to heal, as you can switch between her skill talents to heal.

Note: Qiqi gets a Healing Bonus% boost that scales with her ascension levels.

This healer build for Qiqi focuses on making sure your team is always healthy in both single play and co-op. I would focus on leveling up both her elemental skill and burst because that is where her healing kit is focused on. Her normal attack will only be used to apply Fortune-Preserving Talisman, so it isn’t your highest priority.

Her recommended weapon, the Skyward Sword, is a 5-star weapon that has the secondary effect of energy recharge. This build will depend heavily on using her elemental skill and burst, so energy recharge is important so you can use those skills faster. It has one of the highest base power for a sword and has the Sky-Piercing Fang ability. This ability grants the user increased CRIT Rate, Movement SPD, ATK SPD, and on her normal attack when she uses her elemental burst. The effect will allow Qiqi to hit faster and deal more damage overall.

The Sacrificial Sword can also be used since it has energy recharge for its secondary stat. The ability, Composed, works well to combat Qiqi’s long cooldown as it has a chance to reset her elemental skill cooldown. It is also a 4-star weapon, which is easier to obtain than the Skyward Sword.

The Favonius Sword is another option you can use, but it relies on CRIT hits to activate its skill. Since this build doesn’t focus on CRIT Rate, it will be more based on luck when it does activate so I wouldn’t recommend it compared to the other two weapon choices above.

The best artifact set for a healer is the Maiden Beloved. At a 4-piece set, Qiqi will gain 15% healing effectiveness, and using her elemental skill & burst will increase healing to the party. Attack and energy recharge should be your top stats for your artifacts as that would guarantee you the best healing output. Energy recharge will also allow you to use your skills faster. Healing Bonus will also be nice as it would stack with Qiqi’s healing bonus she gets from her ascension levels. A 4-piece Noblesse Oblige set will also work if you plan on using her elemental burst often and will provide your teammates with an attack boost.

When equipped with the Sacrificial Sword, Qiqi can benefit from the 4-piece Tenacity of the Millelith to increase her team’s ATK and shield strength when her elemental skill hits an enemy. Its 2-piece won’t benefit Qiqi as her healing scales off ATK and not HP.

If you want to focus on a more DPS build for Qiqi, this utility build will work best if she is your main damage dealer. Her skills scale with her attack, making her a viable damage dealer if you do choose to go down that route. This build will focus on both her healing potential and deal damage at the same time. You will want to focus on Qiqi’s normal attack and elemental skill to balance healing and attacking. Her elemental burst can take less priority if you want to conserve resources.

Her weapon of choice is the Aquila Favonia, a 5-star weapon, that increases physical damage. Its passive effect, Falcon’s Defiance, increases ATK by 20% and deals damage to nearby enemies and heals Qiqi based on her attack stat. This weapon is incredible for this build because it allows Qiqi to deal damage while keeping herself healthy.

The Flute is another solid option because of its ability to unleash up to 200% ATK DMG to surrounding enemies. This pairs well with Qiqi’s rapid melee strikes, as she can easily collect 5 Harmonic chords to trigger The Flute’s effect.

Qiqi’s artifact set should remain as the Maiden Beloved to increase her overall healing output. In this build, her healing is focused more on herself than on healing her teammates. You can also choose to use a 2-piece Gladiator’s Finale/Shimenawa’s Reminiscence to give her +18% ATK along with a 2-piece Maiden Beloved. The stats on her artifacts should still have a focus on ATK and Energy Recharge so she can hit hard and use her skills more frequently.

Qiqi can benefit from the Ocean-Hued Clam artifact set to deal damage to enemies when she heals her team. It will also provide her a healing bonus to increase the damage dealt by the Sea Foam and the health she provides her teammates.

The artifact’s main stats should be:

Fischl can cause the elemental reaction Superconduct that will deal Cryo AoE Damage and lower enemy resistance to physical attacks.

Chongyun’s passive talent can increase Qiqi’s attack speed by 8%. At Ascension 4, his skill will also lower Cryo RES of enemies. so you can deal more damage.

Xingqiu can be a reliable source of freeze if paired with a cryo character due to his elemental burst. His burst also carries over if you switch characters.

Having two pyro users on a team will provide a buff to Qiqi’s attack. Xiangling can also provide the melt effect to deal extra damage.

Bennett makes a great support unit with his short cool down and elemental burst that can heal and boost ATK. He can also serve as a second healer.

Barbara can apply the wet status to enemies and heal as well. She pairs nicely with Qiqi to freeze enemies.

Qiqi is an excellent healer, making her viable in many domains and boss fights. However, exploring with her in the overworld can be a pain because of her small figure making it hard to climb and swim. As a 5-star, Qiqi’s stats are higher than 4-star characters, but she may be harder to obtain for some players due to the low rates of getting a 5-star character. The good thing is that she will always be available in the current pool of 5-stars! She can fit in a variety of teams and can fill in the role of an attacker and healer. Qiqi is also easy to use as her main focus is hitting the enemy to trigger Fortune-Preserving Talisman to heal herself and her teammates.

What do you think of Qiqi? Is there anything I missed? Let us know in the comments below! You can also reach out through our Twitter or my Discord handle Seyfrid#2589.