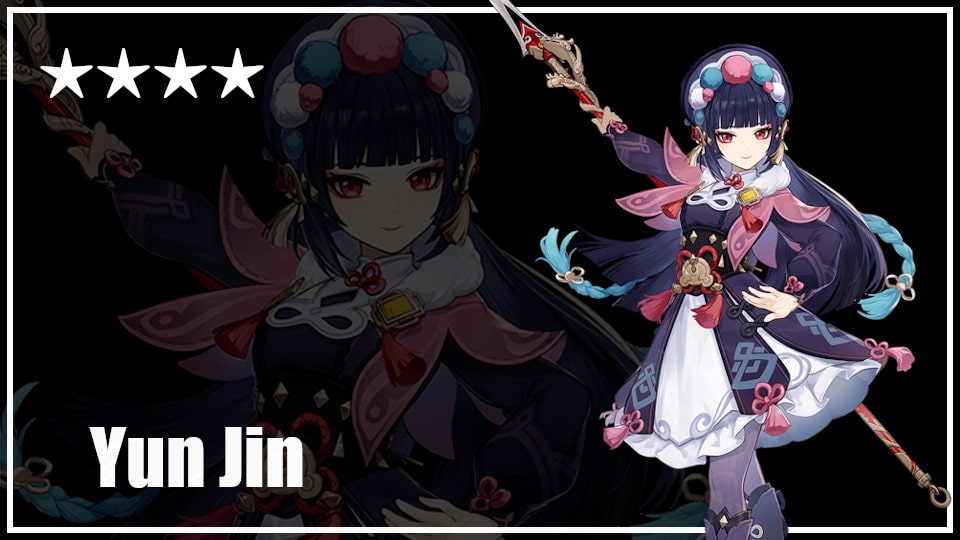 Yun Jin is a 4-star Geo character from Liyue and uses a pole-arm in battle. The Traveler first meets Yun Jin during the competition to gather materials to rebuild the Jade Chamber. She also does an opera performance during the opening ceremony of the Jade Chamber.

Yun Jin is renowned throughout all of Liyue as an accomplished director, playwright, and singer. As an opera performer, Yun Jin is very serious about her craft and makes sure all of her viewers are left satisfied after her performance. However, despite appearing graceful and traditional, Yun Jin likes to explore outside her range and secretly likes to listen to rock music. As a result, she always finds the time to go to Xinyan’s concerts.

Yun Jin would often practice for endless hours as a child under her mother’s supervision. The strict training she had to endure made her a master in the art of dancing, singing, and acting. She loves the art of storytelling with the performances, often singing about the mortal world instead of focusing on the adepti legends. She is currently doing performances for the Yun-Han Opera Troupe.

Yun Jin serves as a support character to boost the normal attack of her teammates, but can also dish out damage herself through the use of her elemental skill charged attack. Both the buff she provides and her elemental skill damage scales off her DEF stat.

Yun Jin’s normal attack, Cloud-Grazing Strike, has 5 attacks in its attack combo. The second and third attacks with her pole-arm will deal 2x damage. The fifth attack will deal the most damage. Her charged attack will lunge her forward to deal damage to the enemy. As a support, Yun Jin won’t be relying on her normal attack.

Her elemental skill, Opening Flourish, has a press and hold effect. The press effect will simply deal Geo DMG with her polearm. Her hold effect allows Jun Yin to take a stance and forms a shield that will scale off her Max HP. This shield is 150% effective against all elemental and physical attacks, but will only last while Yun Jin is holding down her skill or the shield breaks. When the shield is broken or released, Yun Jin will unleash Geo AoE damage on the surrounding enemies.

The damage dealt will either be at charge level 1 or 2, depending on the amount of time she charged up the attack. This talent is similar to Beidou’s skill. However, this talent scales off the amount of time Yun Jin charges up, rather than the amount of time the enemy hits the shield. The damage scaling of the attack is also based on Yun Jin’s DEF stat, so raising that stat will boost the damage of her skill. Yun Jin is able to quickly unleash her elemental skill at charge 2, but it requires careful timing with her ascension 1 talent. This shield will also only protect Yun Jin from damage. Both the press and hold effect has a cooldown of 9 seconds.

Yun Jin’s elemental burst, Cliffbreaker’s Banner, deals Geo AoE DMG to nearby enemies and grants nearby party members the Flying Cloud Flag Formation buff. This buff will scale the character’s normal attack damage based on a portion of Yun Jun’s current DEF stat. This is a dynamic buff, like Shenhe, and will disappear once the duration ends or after 30 hits are dealt to the enemy. This quora limit isn’t as restricting as Shenhe’s and works to boost the normal attack damage of any character. The buff is based on Yun Jin’s current DEF, but since she will be off the field, Gorou’s buff that only affects the active won’t apply to her bonus. The burst’s effect will only last 12 seconds. The buff can also be triggered multiple times if the normal attack hits multiple enemies. Yun Jin’s burst requires 60 energy and has a cooldown of 15 seconds. This burst is a great support talent, allowing Yun Jin to raise the damage of any Main DPS character that uses their normal attack to deal damage. The attack bonus is further increased with Yun Jin’s ascension 4 talent.

Yun Jin’s passive talent, Light Nourishment, has a 12% to create double any Adventure-related dishes when she is used to perfectly cook the dish. This talent will help players receive more dishes that will help them explore the overworld, especially the stamina-reducing dishes.

Her ascension talent, True to Oneself, unleashes her level 2 charge from her elemental skill when Yun Jin releases it at the right moment. This is similar to Beidou’s counter and requires players to time it correctly. Once timed, Yun Jin can quickly unleash her elemental skill instead of having to wait to charge it up. This talent will ultimately reduce the charge time of Yun Jin’s skill.

Yun Jin’s ascension 4 talent, Breaking Conventions, further increases the buff from her elemental burst based on her DEF stat. The DEF scaling of this talent depends on the number of elemental types within the team. To maximize the effects of this talent, you will need characters of 4 different element types on the team. However, this will not work for most teams, as you will be sacrificing any elemental reactions for Yunjin’s ascension 4 buff. You will want to aim for 2-3 elements of the team to still benefit from reactions. However, the added buff off this talent will still work to increase the normal damage buff of your team, even if the effect of this talent isn’t fully maximized.

Yun Jin gets an Energy Recharge bonus based on her ascension rank.

Yun Jin’s constellation focus on boosting her DEF, while proving her teammates with buffs through her elemental burst. She is perfectly fine to use at C0, but the increased DEF from her C4 will help boost her support potential and overall damage.

C2: Myriad Mise-En-Scene grants nearby teammates increased normal attack damage for 12 seconds after her burst is used. This will further boost the team’s normal attack along with her burst’s buff. This constellation does not count toward the limit of her burst.

C4: Flower and a Fighter increases Yun Jin’s DEF by 20% after she triggers the Crystallize reaction with another element. This increased DEF will help boost the damage buff she provides from her burst and increase the damage of her elemental skill. This constellation has no cooldown.

C6: Decorous Harmony increases the normal attack speed of any character that has her burst’s buff. This will help them attack faster, but there is still a quota limit in place that restricts the number of hits that her damage buff will be applied to enemies.

Yun Jin works best as a support with her ability to increase the team’s normal attack damage with her elemental burst. Your first priority is to level up her burst, and then her skill. Both Yun Jin’s normal attack buff and skill damage scale off her DEF stat. Yun Jin’s normal attack isn’t needed for a support build. Due to her normal attack bonus coming from her burst, it is crucial you remain its uptime. You will want to build up both her DEF% and Energy Recharge. Her elemental skill will be useful to deal some damage to the enemy and charge up energy for your burst. Yun Jin will be off the field for the majority of the time.

Yun Jin can work in any team composition to boost your Main DPS’s damage. To fully maximize her bonus, you will need 4 different elements on your team due to her ascension 4 talent. She can still work for other teams, as she will still be able to raise the party’s normal attack damage. Both Bennett and Xingqiu will serve as support. Xingqiu’s burst will work alongside Yoimiya to deal damage with her infused Pyro normal attack. Yomiya relies on her normal attack to deal damage, so she is a great pair with Yun Jin. She can be replaced with any Main DPS character. She and Bennett will also boost the ATK stat of the entire team with the Pyro team buff.

For Yun Jin’s weapon, you will want to look for one with an energy recharge sub-stat, like the 5-star Engulfing Lightning or 4-star Favonius Lance. As a support, Yun Jin will work better with the Favonius Lance, since she will regain energy for the entire team when she triggers a critical hit. The Engulfing Lightning will increase her attack based on the amount of ER she has, and restore some energy after using her burst. This weapon is focused more on damage, but will still help restore energy for her burst.

The 4-star Deathmatch is another option for Yun Jin, as it will increase her DEF, depending on the number of enemies around her. This will boost the buff she provides with her burst and is also active when she is off the field.

For Yun Jin’s artifact, use the 4-piece Husk of Opulent Dreams to raise her DEF and Geo DMG. Gaining stacks of Curiosity will also be easy, as Yun Jin will remain off the field until it is time to use her skills and burst again. You also have the option of equipping her with a 2-piece Husk of Opulent Dreams and Emblem of Severed Fates to raise her DEF and Energy Recharge.

In the early game, use the 2-piece Defender’s Will and The Exile to raise her DEF% and Energy Recharge. You may also use a 4-piece The Exile for extra Energy Recharge and provide energy to the team after using Yun Jin’s burst.

Yun Jin’s artifact stat should be:

If you are using the Favoniou Lances, then Crit Rate is needed to reliably trigger its passive effects. Focus on DEF, Energy Recharge, and Crit Rate, in her sub-stats.

This build is similar to the first build, but uses the Noblesse Oblige to boost the damage of her elemental burst and raise the party’s ATK after Yun Jin uses her burst.

For her party members, Fischl is a fast normal attacker and has an elemental skill that can passively deal Electro DMG. Raiden Shogun can also deal passive Electro DMG and will help charge energy for the team with Fischl. Diona will shield and heal the team. She can also apply Cryo to enemies to trigger Super Conduct. This will allow Fischl to deal more physical damage with her attacks.

As the first build, Yun Jin’s artifact stat should be:

Bennett is a great support with the ability to buff the team’s attack and heal with his elemental burst.

Raiden can help recharge the energy of the team and deal passive Electro DMG with her elemental skill.

Diona can heal, shield the team, and apply Cryo to enemies.

Yun Jin is a Geo support character with the ability to buff the team’s normal attack damage with her elemental burst. Her elemental skill works as a shield for herself and to deal damage based on the charge level. Like most Geo characters, Yun Jin’s damage and buff scale off her DEF stat. Overall, her burst allow her to like a support role in a variety of teams