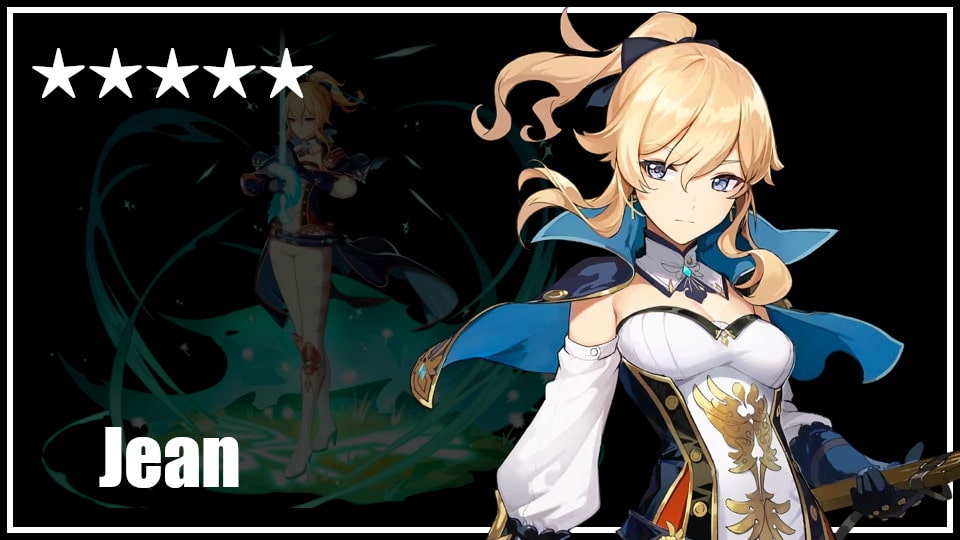 Jean is a 5-star Anemo character from the region on Mondstadt. She is currently the acting Grandmaster of the Knights of Favonius. The Traveler first meets her in Act 1, where she helps them defeat Stromterror.

As the acting Grandmaster, Jean holds many responsibilities within the city and is always upholding her duties without rest. She is devoted to maintaining the peace and freedom of Mondstadt. No matter the task, Jean will make sure it gets done. This has caused other members of the knights to be concerned about her health.

Jean is a part of the Gunnhildr Clan, one of the oldest clans of knights with Mondstadt, and was molded at a young age to be the head. Jean was raised by her mother, while her sister Barbara was raised by her father.

Jean’s main use will be her burst that will apply Anemo to the character and heal your team. She does have some physical capabilities and her elemental skill can also launch enemies high into the air.

Jean’s normal attack, Favonius Bladework, has 5 attacks in its combo. The second hit will deal the least damage, while the 5th with deal the most. Her charged attack will launch attacks into the air. With her ascension 4 talent, Jean has a chance to heal the entire party when she lands a hit with her normal attack. Aside from a physical DPS role, Jean’s normal attack will not offer a lot of damage in a healer or support role.

Jean’s elemental skill, Gale Blade, will pull nearby enemies in the direction she is facing and launches them to deal Anemo DMG. By holding down the skill, Jean will consume stamina and will be immobile while she is using it. You can adjust the direction of her skill while holding down. The more Jean uses her hold effect, the more stamina she consumes in her skill. Launched enemies will also be dealt physical fall down when they land on the ground. This skill has a max duration of 5 seconds with a 6-second cooldown. Jean’s elemental skill can be a good source of Anemo DMG and physical damage when enemies hit the ground. However, the more her elemental skill is used the more stamina that is consumed, and Jean will also be prone to knockback as she is stationary during the duration of her skill.

Jean’s elemental burst, Dandelion Breeze, creates the Dandelion Field effect. This will launch nearby enemies and deal an initial burst of Anemo DMG. Casting Jean’s burst will heal all party members based on a portion of Jean’s ATK stat. While inside the range of her field, party members will also regain health based on Jean’s ATK and have Anemo applied to them. This burst will also be effective in cleaning the character’s element. The field will Swirl twice, once when it is cast and another when it disappears. Enemies entering and leaving her burst will also be dealt Anemo damage. This field effect will last 9 seconds with a cooldown of 20 seconds and energy cost of 80. Jean’s burst is great to heal the entire party while also getting rid of any element on your character. It does have a high energy cost so it is recommended to invest in ER or another Anemo character.

In co-op, Jean can play the role of a healer or physical DPS to deal damage herself. She will be mainly used for burst for its elemental cleanse and health regeneration.

Jean’s passive talent, Guiding Breeze, allows her to gain double the product when she is used to perfectly cook healing dishes. It only has a 12% to trigger, but will be useful to gain more healing items for your team. She shares this talent with her sister Barbara and Diona, so there won’t be any use for this talent if you already have them.

Her ascension 1 talent, Wind Companion, allows Jean to heal the entire party when she lands a hit with her normal attack. It will have a 50% to trigger and requires Jean to use her physical attack. The amount it heals per hit isn’t huge as it will only heal 375 health if Jean has 2500 ATK, but it is nice to recover some health for the party.

Ascension 4 talent Let the Wind Lead restores 20% energy of Jean’s burst when she uses her burst. This talent will allow Jean to use her burst more easily.

Jean gets an increase to her Healing Bonus based on her ascension rank.

Jean’s constellation offers a mix of supportive skills while increasing the damage of her burst and elemental skill.

C1: Spiraling Tempest increases the pulling speed and damage of Jean’s elemental skill. There is a 1-second requirement before the constellation can trigger, but will still allow her elemental skill to deal more damage.

C2: People’s Aegis increases the movement speed and attack speed of all party members when Jean picks up an elemental orb or particle. This will require Jean to be on the field to pick up the orb or particle.

At C4: Lands of Dandelion, Jean becomes a great support for other Anemo characters to increase the Anemo damage they deal to enemies. This constellation reduces the Anemo RES of enemies with Jean’s burst, allowing the burst to deal more damage along with other Anemo attacks within it.

Jean is best used as a support with her burst that can deal Anemo DMG when casted and heal the party. This build requires her to level up her burst and maximize its uptime with either ER in her stats or another Anemo character. Her elemental skill will be useful for dealing Anemo DMG, while the damage of her normal attack won’t matter as she will be casting her burst and switching out. You will also want to build up Jean’s ATK stat to boost her healing.

For Jean’s teammates, you will want another Anemo character like Xiao that can boost the recharge of their bursts. Xiao’s burst also takes away a portion of his HP so Jean’s burst will be able to heal him back up. He will also serve as the Main DPS for this build. Bennett will heal and buff the attack of the team with his burst. Both their field effects can stack with each other to constantly trigger Swirl. Mona can be replaced with another support character, but her burst will allow Xiao to deal more damage to affected enemies. This build does heavily relies on using a character’s burst, so you can replace Mona with an Energy Battery like Fischl to gain more energy for your team.

As a support, any 5-star weapon will work with Jean due to their high base attack. The Primordial Jade Cutter is one of Jean’s best weapons as it increases both her Crit Rate and HP. In addition, her ATK is further increased by her HP. The Mistsplitter Reforged is decent and will increase Jean’s Crit DMG and elemental damage. This weapon will require Jean to be on the field to gain all of the stacks to gain the elemental damage bonus. However, Jean will not be able to obtain all the stacks asher normal attack can’t deal elemental damage on its own.

For 4-star weapons, the craftable weapon from Inazuma, Amenoma Kageuchi, boosts ATK and restores energy by gaining Seeds of Succession from using Jean’s elemental burst. The seeds are consumed when she casts her burst and will provide her some energy. You can also use 4-star Festering Desire which will increase her energy recharge and elemental skill damage.

Other great options are The Flute or Favonious Sword.

Jean’s best artifact set is the 4-piece Viridescent Venerer since it will boost her Anemo and Swirl DMG. This set is the best set for any Anemo character as it will also decrease the enemy’s elemental resistance based on the element it swirls with. You can also use the 4-piece Noblesse Oblige to boost Jean’s burst damage and raise the attack of the team when her burst is used.

For the sub-stats, look for ATK%, Energy Recharge, Crit Rate, or Crit DMG.

As a DPS character, Jean will mainly use her physical normal attack and not her Anemo DMG as she can not infuse her normal attack with Anemo DMG. Her other skills can still be usable as her burst will still be able to heal herself.

For Jean’s teammates, you will want to rely on the Super Conduct reaction to decrease the enemies’ physical resistance. Both Ganyu and Raiden Shogun will allow you to easily trigger the reaction while dealing massive amounts of damage on their own. The last slot on your team can either go to another Electro character like Fischl or Cryo character like Diona, depending on which team buff you want to utilize. You can also go with Bennett to heal and buff the team’s attack.

Any 5-star weapon will be great for a Main DPS Jean. Both the Primordial Jade Cutter and Aquila Favonia offer great passive skills to work alongside Jean’s physical attack. The Primordial Jade Cutter increases ATK and HP, with a passive stat in Crit Rate. The Aquila Favonia boosts Physical DMG and deals additional damage to enemies while healing her. The Mistsplitter Reforged has a great Crit DMG bonus, but this weapon does increase elemental damage, which will not fully benefit a physical built Jean. Jean will also not be able to gain all stacks on her own as one of the stacks requires elemental damage to be dealt with by her normal attack.

For 4-star weapons, the Prototype Rancour has a physical damage bonus and can increase Jean’s ATK and DEF when she uses her normal attack. Other good options are The Black Sword, The Flute, or Harbinger of Dawn. The Harbinger of Dawn increases Crit DMG and her Crit Rate when her health is above 90%. This can also be a great early game weapon for Jean.

Jean’s recommended artifact for a physical build is a 4-piece Pale Flame to increase her Physical DMG. Its 4-piece effect boosts Jean’s ATK when she uses her elemental skill to hit an enemy. She can also go with 2-piece Pale Flame and Bloodstained Chivalry for a +50% Physical DMG Bonus.

Bennett has a great support burst that can heal and buff the attack of the team. Both Jean’sand Bennett’s bursts work great together to trigger Swirl.

Mona’s burst will increase the damage dealt to enemies. She can be replaced with another support character.

Xiao will serve as the Main DPS. Jean can help recharge his burst while healing him.

Ganyu can apply Cryo to enemies with her burst. She and Diona will help recharge each other bursts.

Diona is capable of shielding the team and producing extra healing along with Jean.

Raiden Shogun can deal passive Electro DMG and apply Electro to enemies with her elemental skill.

Jean is an Anemo Sword character capable of healing the party and cleansing the team of elements with her burst. Her main use will be her burst, followed by her elemental skill to pull in enemies and launch them into the air. Her normal attack can also heal the entire party when she unlocks her ascension talent. Jean can play the role of a physical DPS or Anemo support character for your team.