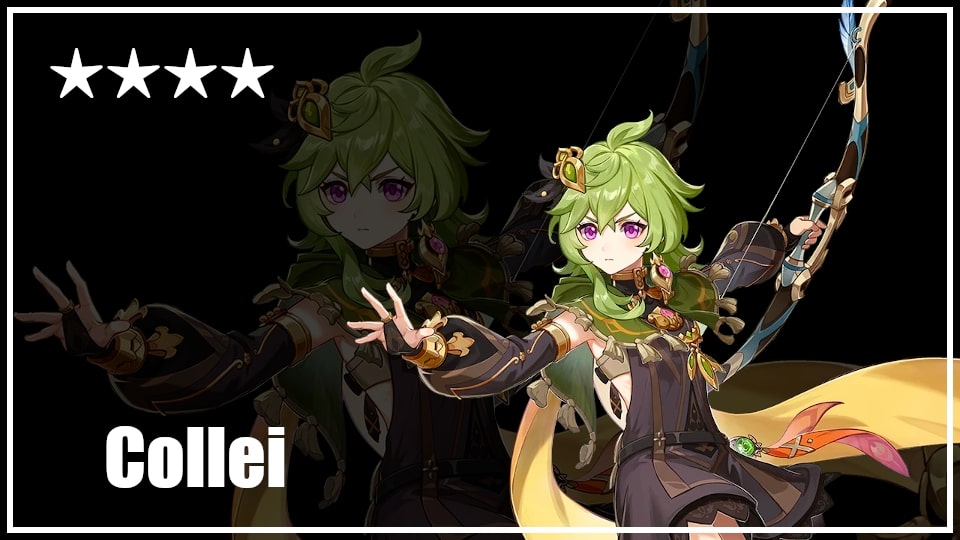 Collei is a 4-star Dendro character from the region of Sumeru. She uses a bow in battle. Although the Traveler doesn’t meet her until they arrive in Sumeru, she is first introduced in the Genshin manga where she suffers from Eleazar. She now serves as a trainee forest ranger under the direction of Tighnari.
As a child, Collei was given to the Fatui in an attempt to cure her of her sickness. However, she was experimented on instead by the harbinger Dottore. As a result, she is slow to trust others and saw her life as a burden. She managed to escape to Monstadt where she met the Knights of Favonious and started a friendship with Amber, who changed her outlook on life and became her role model. She later returns to Sumeru with Cyno and now works as a forest ranger trainee.
Moving on from her past, Collei has vowed to protect others and now has a more happy outlook on life and is more open to others. She and Amber still communicate through mail, with Amber informing her about the Traveler and their adventures together.

Collei’s main use in combat will be through her elemental burst to apply Dendro to enemies. Her elemental skill will be used to deal Dendro DMG to enemies and restore energy.

Her normal attack, Supplicant’s Bowmanship, allows Collei to perform up to 4 attacks with her bow, with the 4th strike dealing the most damage. Charging her attack, infuses it with Dendro, allowing her to deal Dendro DMG to its target. As a sub-DPS, Collei’s physical regular attack will see little use.

Her elemental burst, Trump-Card Kitty, summons Cuilein-Anbar to create an explosion of Dendro DMG and put down a Cuilein-Anbar Zone. The zone will deal Dendro DMG to enemies within its range and is a great way to infuse them with the Dendro element for 6 seconds. Collei’s burst has a cooldown of 15 seconds with a 60 energy cost. Her ascension 4 talent extends the duration to 9 seconds if 3 Dendro elements are applied within its range.

Collei’s main use in co-op will be to apply Dendro to enemies with the use of her field burst. She can be used as a Main DPS if her physical regular attack is built, but she does have weak scaling on her normal attack so it is not recommended.

Collei’s passive talent reduces gliding stamina consumption. Her ascension gives her additional effects depending on the activation of Dendro reactions.

Collei’s passive talent, Gliding Champion of Sumeru, reduces the use of stamina when gliding while she is in the party. This talent is good for exploration, but does not stack with other talents with the same effect. She shares this talent with Amber.

Her ascension 1 talent, Floral Sidewinder, grants the active character the Sprout effect when a Dendro reaction is triggered after the use of her elemental skill. The reaction will need to be triggered before her ring returns to the active character. The Sprout effect deals Dendro DMG% to nearby enemies and counts as Elemental Skill DMG. This talent boosts Collei’s overall damage, but requires a reaction to trigger the effects. This is fixed with her constellation 2 effect.

Collei’s ascension 4 talent, The Languid Wood, increases the duration of her elemental burst field when a Dendro reaction is triggered within its range. It can only be extended by 3 seconds, with a reaction increasing it by 1 second for each activation.

Collei gets an ATK% based on her ascension rank.

Collei’s constellations provide buffs for her teammates and upgrade her elemental skill effect and burst.

At C1: Deepwood Patrol, Collei gains Energy Recharge when she is not the main active character in your party. This is great for a sub-DPS build to charge up her burst faster.

C2: Through Hill and Copse upgrades Collei’s ascension 1 talent when she uses her elemental skill when it returns to the active character. This allows the activation of the Sprout effect without having to trigger a Dendro reaction. Triggering a Dendro reaction will lengthen the duration of the effect on the enemy once per activation. This constellation removes the activation restriction of her passive talent allowing it to be more easily triggered.

C4: Gift of the Woods allows Collei to support her teammates with an elemental mastery bonus after using her elemental burst. It is overall good to boost the power of reactions of the party. Collei is not affected by this buff.

At C6: Forest of Falling Arrows, Collei will create a miniature Cuilein-Anbar to deal additional Dendro DMG to the enemy after her elemental skill hits an enemy.

This build for Collei utilizes the Gilded Dreams to lower Dendro RES, while her burst spreads Dendro to enemies for reactions. Collei’s burst has a wide range of effects that allows it to damage to groups of enemies while setting up reactions. This makes her a good burst support for other Dendro characters like Tighnari. Her skill will also be useful to deal Dendro DMG . Having two Dendro characters will also increase the elemental mastery of the team when a Dendro reaction is triggered.

For her teammates, you will want to pair her with another Dendro character like Tighnari or the Dendro Traveler to fully benefit from the Dendro resistance spread of the Deepwood Memories artifact set. Fischl will deal passive Electro DMG to enemies to trigger the Quicken Reaction and act as an energy battery. She can be replaced with other characters depending on which reaction you plan to use. Sucrose will buff the reaction of the team and also act as crowd control for the enemy.

For Collei’s recommended weapon, you will want to use the Elegy for the End or the Favonius Warbow as they have a passive stat in Energy Recharge. The 5-star Elegy for the End can buff the elemental mastery and ATK of the team when all 4 sigils are collected. The Favonius Warbow generates particles for the team when Collei lands a critical hit. The 5-star Aqua Simulacra is also good for Collei with its passive in Crit DMG and can increase the damage of the user even if they are off the field as long as enemies are around. You can also use the Sumeru weapon King’s Squire to boost Collei’s elemental mastery and deal additional damage to 1 enemy once the buff duration is over. Any 3-star weapon will suffice for the early game depending on the situation. The Sharpshooter’s Oath can increase Crit DMG while the Raven Bow increases elemental mastery and boosts the damage against enemies affected by Hydro or Pyro.

Collei’s recommended artifact set is the 4-piece Deepwood Memories. This set increases her Dendro DMG and decreases the enemies’ Dendro resistance after they are hit with an elemental burst or skill. This ability allows Collei to support her teammates with the use of her burst. You may also use the 4-piece Noblesse Oblige to raise the ATK of the team when she uses her burst. The Noblesse Oblige is also good in the early game if you do not have Sumeru unlocked. The Exile will also work in the early game for extra energy regeneration for the team.

His sub-stats should focus on Crit DMG, Elemental Mastery, Crit Rate, ER, and ATK%. You will want to aim for around 180%-200% Energy Recharge to utilize the uptime of her burst.

This build for Collei focuses on the damage of her burst while also boosting its energy recharge. You will want to utilize the Dendro Travelver with the Deepwood Memories set to benefit from the Dendro resistance debuff on enemies.

This team composition is designed for the Burgeon reaction after creating a Dendro core with a Hydro character like Ayato or Childe when Hydro and Dendro meet. Thoma will then use his elemental burst to trigger the Burgeon to deal damage to the enemy. His shield will be triggered when the explosion occurs, protecting your team from the damage. The Dendro Traveler will be used as another support by putting down their lamp. Just be careful not to set their lamp on fire.

For this build, Collei can use the 5-star Polar Star to increase her elemental burst and skill damage. Using her talents will increase Collei’s ATK by 4 stacks. Other 5-star options are the Elegy of the End and Aqua Simulacra. For her 4-star weapons, The Stringless increases EM and raises the damage of her elemental skill and burst. She can also use Mouun’s Moon, End of the Line,  or Favonius Warbow. For craftable weapons, both the Prototype Crescent or the King’s Squire will suffice.

Collei’s artifact is the 4-piece Emblem of Severed Fate to raise ER and boost her burst damage by a portion of her ER stat. You will want to aim for around 200% ER to fully benefit from this set.

In the sub-stats look for Crit DMG, Crit Rate, ATK, EM, and ER.

Fischl will deal passive Electro DMG to the enemy.

Sucrose can share her elemental mastery with the team and boost their reaction damage.

The Dendro Traveler is a great Dendro support with the use of his elemental burst.

Ayato can create Dendro cores and is also a powerful Hydro DPS character. He can be replaced by another Hydro DPS.

Thoma can deal passive Pyro DMG to trigger Burgeon while protecting the active character from the explosion.

Collei’s kit showcases the power of the Dendro element, allowing her to easily trigger Dendro reactions. She works best as support or sub-DPS with the use of her elemental burst which has a wide field of effect and applies Dendro to enemies within its range. Her normal attack is not that good, but she will rarely use it as her main role is to put down her burst and skill and then switch to another character.

What do you think of Collei? Is there anything I missed? Let us know in the comments below! You can also reach out through our Twitter or my Discord handle Seyfrid#2589.