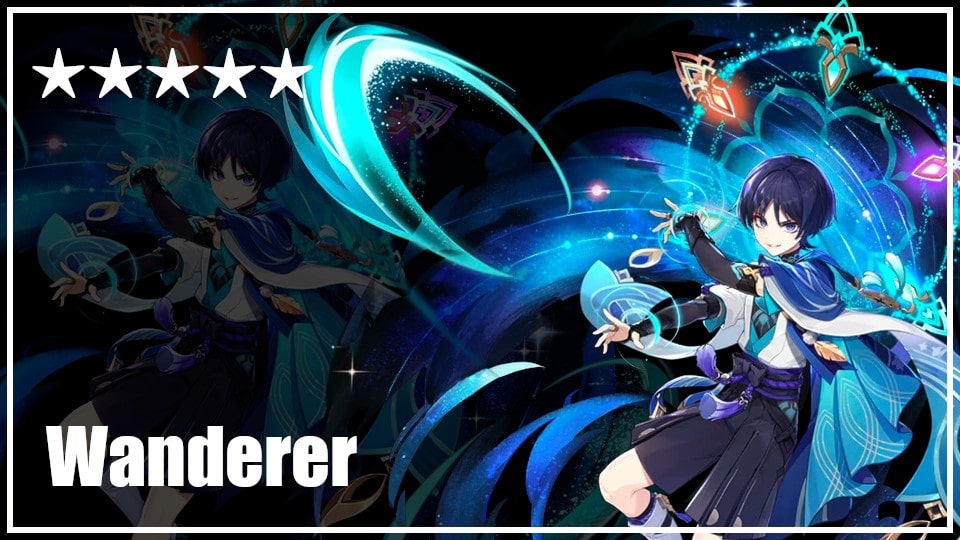 The Wanderer is a 5-star Anemo character that uses a catalyst in battle. Although he first reigns from Inazuma, he does not get his vision until the Traveler meets them in Sumeru. He encounters the Wanderer multiple times as the Fatui Harbinger Scaramouche before Scaramouche decides to become the Wanderer. The Wanderer was originally a puppet made by the Elector Archon to be a vessel.

Scaramouche, he is violent and aggressive with a deep hatred of humans. This hatred stems from the betrayals of all the people he was close to in the past. This includes the Electro Archon, who he believes abandoned him. However, she simply wanted him to be free. As the Wanderer, he is more kind towards people, although he yearns for a heart.

Fun Fact: The Wanderer has no affiliation. he Player can also change his name.

Wanderer’s elemental skill allows him to hover in flight and deal increased Anemo DMG with his normal and charged attack.

His normal attack, Yuuban Meigen, can perform 3 consecutive attacks that will deal Anmo DMG to the enemies, with the 3rd attack hitting twice. The Wanderer’s charged attack builds up wind pressure after a short casting time to deal AoE Anemo DMG to the enemy. Alothugh his normal attack is swift and capable of dealing Anemo DMG to enemies, his elemental skill overrides its damage multiplier, enabling him to deal even. more damage.

The Wanderer’s elemental skill, Hanega: Song of the Wind, deals an initial burst of Anemo DMG to nearby enemies before the Wanderer enters the Windfavored States and hovers above the ground. This allows him to perform aerial attacks. While in the Windfacvored State, the Wanderer’s normal and charged attacks are converted into Kuugo: Fushoudan and Kuugo: Toufukai. This will increase their AoE and damage output. Both are still considered normal and charged attack damage. While in the state, Kuugo: Toufukai will not consume any stamina.

To maintain this hovering state, the Wanderer must consume Kuugoryoku Points and can also perform various movements while in the Wind Favored state. Tapping on the elemental skill again while in this state will also end it.

The Wanderer’s elemental skill has a cooldown of 6 seconds. However, he can stay in the form as long as he still has Kuugoryoku Points. Players must remember that touching his skill again will end his skill effect. One of the biggest drawbacks of his ariel state is knockback. While the Wanderer is hovering, he is not immune to interruptions and can easily be knocked back if an attack lands on him. A shield is recommended to keep him from staggering if he is hit by an enemy attack. If he is hit and interrupted, you can hit the spring or jump button to quickly recover. The Wanderer’s elemental skill will be his main damage dealer. His elemental skill can also allow for easy navigation in the overworld for a brief moment.

His elemental burst, Kyougen: Five Ceremonial Plays, performs a stomp on the ground to deal 5 bursts of Anemo DMG on the enemy. This will also immediately end the Windfavored state if he is in it while casting the burst. The Wanderer’s burst is a good source of quick damage. It has a cooldown of 15 seconds and requires 60 energy to activate.

In co-op, the Wanderer will mainly be a source of Anemo DMG and Swirl Reactions. He is prone to interruptions while he is hovering, so a shield generator on the team is strongly recommended.

Wanderer’s ascension talents improve the usability and damage of his elemental skill hovering effect. His passive skill helps you save on Mora when ascension bows and catalyst weapons.

The Wanderer’s passive talent, Strum the Swirling Winds, dramatically reduces the Mora spent when ascending blows and catalysts. This is a great talent that allows you to save on Mora when ascending these types of weapons.

When the Wanderer’s elemental skill is first active and he comes into contact with another element, his ascension 1 talent, Jade-Claimed Flower, will grant him various buffs depending on the element.

Each buff gives him more damage, with the Hydro increasing the amount of time he can spend in his hovering form. The buffs help the Wanderer in various situations depending on the elements of the team and the elemental he is around.

At ascension 4, Gales of Reverie, the Wanderer has a chance to obtain the Descent effect when he hits an enemy with his elemental skill Kuugo: Fushoudan or Kuugo: Toufukai while in his Windfavored state. With this buff, after he accelerates in mid-air, the effect will be removed and he will not consume any Kuugoryoku Points. In addition, he will fire off wind arrows that will deal Anemo DMG to enemies. If Kuugo: Fushoudan or Kuugo: Toufukai does not trigger the effect, then the next one will have an increased chance to activate it. His ascension skill allows the Wanderer to deal additional damage while conserving his Kuugoryoku Points.

Wanderer gets a bonus to his Crit Rate based on his ascension level.

The Wanderer’s constellation provides him a variety of effects that mostly boost the damage and buffs of his elemental skill.

At C2: Niban: Moonlit Isle Amidst White Waves, the Wanderer gains increased damage for his burst based on how many Kuugoryoku Points he still has in his meter. This constellation serves to increase his burst damage, depending on how many points he has used up so far.

C4: The Stem of Manifest Inference, the Wanderer has the chance to unlock additional buffs when his ascension talent 1 Jade-Claimed Flower is triggered with his elemental skill. The buffs will help improve his damage based on the element he comes into contact with. 3 buffs can now exist at a time.

C6: Shugen: The Curtains’ Melancholic Sway provides the Wanderer with additional damage when he hits enemies with his elemental skill. When his points are low, this constellation will also restore a few of his points up to 5 times.

The Wanderer’s elemental skill allows him to enter a governing state that will perform increased ariel attacks that deal boosted normal and charged attack damage. For this Main DPS build, you will want to use support characters that will increase his damage or perform passive attacks along with his Anemo DMG. Focus on leveling up both his skill and burst. His normal attack damage is overridden while in his elemental skill state, so it can be ignored.

The Wanderer can work in a variety of teams since his ascension skill has various buffs depending on the element he comes into contact with when it is used. Faruzan is a great Anemo support used to buff Wanderer’s damage. Bennett will heal and buff the ATK of the team. A shield character like Diona or Zhongli is also recommended if you are not able to dodge to enemy attack while in the air.

For his 4-star weapons, The Widsith is his best choice. This weapon increases Crit DMG and has a random chance to provide one of these buffs when he switches in:

The Solar Pearl is another good choice with its passive boost in Crit Rate. Its effect raises the wearer’s attacks depending on which skill is used. Other options are the Mappa Mare, Dodoco Tales, and Blackcliff Amulet. For the early game, use the Amber Catalyst for increased EM and elemental damage.

Wanderer’s recommended artifact set is the 4-piece Desert Pavilion. The 2-piece raises Anemo DMG, with the 4-piece empowering his normal attack speed, normal damage, charged attack damage after hitting an enemy with his charged attack. This set works great on Wanderer, but can also be swapped out with the Viridescent Venerer for increased Swirl reaction.

For the sub-stats, raise the Crit DMG, Crit Rate, and ATK%. EM and ER will also be good,

This builds focuses more on the Swirl reaction with the 4-piece Viridenscen Venderer to boost the Wanderer’s Swirl and Anemo DMG. It is very similar to the first build in terms of usable weapons and team composition.

Faruzan will boost the Anemo DPS of Wanderer’s attack with Diona providing shield and healing. Xingqiu will deal passive Hydro DMG with his skill. He can be replaced with Bennett or Yelan.

Like the first build, focus more on Crit Rate, Crit DMG. EM will be great to raise the power of the Swirl reaction.

Yelan can deal passive Hydro DMG with her burst.

Bennett will heal and buff the attack of the team.

Xingqiu can deal passive Hydro DMG with his burst.

Diona can heal and shield the active character.

Wanderer is an ariel Anemo character that deals increased Anemo DMG with his normal attack and charged attack while his elemental skill is active. Although he is easy to maneuver and control, it is highly recommended to have a shield character paired with him since he gets staggered if he gets hit with an attack in midair. His kit also allows him to easily navigate through the overworld as long as he still has points to consume.

What do you think of Wanderer? Is there anything I missed? Let us know in the comments below! You can also reach out through our Twitter or my Discord handle Seyfrid#2589.